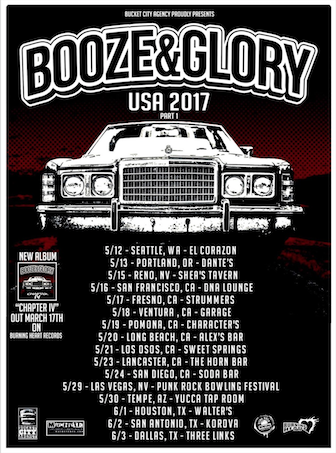 April 26, 2017 – Los Angeles, CA – London’s working class street punk band BOOZE & GLORY will embark this month on a year-long, worldwide tour in support of their newly released fourth studio album, Chapter IV, which is available now from Burning Heart Records. Buy the album now at iTunes (digital) and RoadDogMerch (physical).
The excursion will kick off in a few short days in Germany and will carry the band to the U.S. and Mexico and on to Europe and Japan. Tour dates and tickets can be found at http://www.boozeandglory.com/.
“We just released Chapter IV, Our fourth studio album (first one on Burning Heart Records). We are very proud of the result and the new steps taken. We spent longer than we have previously writing and recording this album and now we have set sail on a worldwide tour. In May we embark on the first part of our USA tour in 2017, and are hitting up the West Coast, Texas & Mexico and ending it all with Punk Rock Bowling.” – Liam Booze

Formed in London in 2009, Booze & Glory started life as a straight-ahead salute to the rowdy street punk and Oi! bands of the late ‘70s and ‘80s UK scene. Thanks to some of the most infectious songwriting to emerge from the capital’s mean streets for a long time, and with a heroic and ruthless dedication to playing live, the band were steadily embraced by a colossal international fan base, with the debut video London Skinhead Crew notching up in excess of 7 million views on YouTube along the way. Triumphant trips to Asia, South America, the US and pretty much anywhere that would have them ensured that Booze & Glory’s first three albums – Always On The Wrong Side (2010), Trouble Free (2011) and As Bold As Brass (2014) – became essential listening for fans of balls-out and snotty rock’n’roll.
Newly signed to legendary Swedish imprint Burning Heart, Booze & Glory are set to claim 2017 as their own with the release of Chapter IV. With plans to play over 150 shows over the next 12 months, including a full month in the US and festival appearances across Europe, the boys’ mission to spread the ageless joy and fury of pure punk rock looks certain to continue long into the future. With a record as strong as Chapter IV behind them, the B&G crew have nothing but glory on the horizon. Up the punx!