Southern California’s Crooked Teeth, have had quite the year thus far, with the signing to independent record label, Rude Records, and the re-issue of their EP, Pastel.Pastel featured a brand new single, “Crawl,” which showcased guest vocals from Stand Atlantics’ lead-vocalist, Bonnie Fraser. Offering a unique blend of eclectic yet gratifying mixture of pop-punk, emo, and alternative sounds, Crooked Teeth are exhilarated to announce their forthcoming EP,Honey, due out November 16th. The EP, produced by Matt Lang, consists of 5 tracks, that take the listener on a rollercoaster of emotions from the infectiously catchy “Hate Me” track, to the effervescent tune, “Absent,” leading straight into their debut release, “Honey.”

In a non-traditional measure, Crooked Teeth combined two choruses they were working on to create “Honey.” An emotionally forward track about not caring about another person and letting the past stay in the past. The song exudes confidence, while toying with one’s inner demon that nothing is ever really over. Lead vocalist, Tyson Evans expands on the building of the track, by stating, “Instrumentally, we mimicked a midi melody on guitar and virtually made the guitar sound like a cool sub bass midi lead. The chilled out bridge interlude was heavily inspired by the Defontes.” 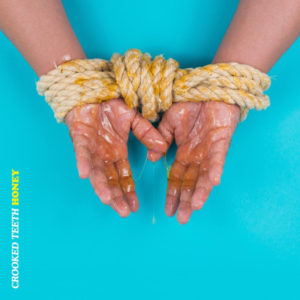 Fans can stream the track in full today and tune in to KROQ’s Locals Only station to hear it on the local channel. Pre-order for Honey is available now!

Hate Me
Honey
Absent
You and Me (Whatever)
Broken Bones

California trio Crooked Teeth offer a unique blend of eclectic yet gratifying mixture of pop punk, emo, and alternative sounds to engage the listener with thought-provoking lyrics. The band, formed in 2016,is comprised of Tyson Evans, Adam Miranda, and Adam Galindo. Upon forming, the band set out to record Out Here, A Lone with producer/engineer/mixer Matt Lang with additional percussion by Andy Rodesney and mastering with Mike Kalijian. The EP is a culmination of emotions for front-man Tyson Evans after his previous band, Second To Last, were wrapping up a tour. Tyson and his fellow bandmates, went on to record the EP in 3 days and is a raw emotional take on life, love, stress, doubt, fear, and social instability. With much success, the band went on to open for As It Is at the iconic Chain Reaction, which led to shows with This Wild Life and a performance at Emo Nite LA.

In spring 2017, the band hit the road with Such A Mess before re-entering the studio to record their follow-up EP, Pastel. The three track EP was produced and mixed by Matt Lang with mastering by Kris Crummett at Interlace Audio. Idobi Radio stated that the EP “will have you so hooked all you’ll wanna do is play these songs for everyone you know.” Tyson Evans expanded on this musical direction by stating that the “EP felt like a formal introduction to the world.” Immediately following the EP launch, the band hit the road for a regional tour with Stickup Kick and Glacier Veins before making another appearance at Emo Nite LA. To celebrate the band went on a headlining tour spanning the entire US with spot dates opening for Welcome Home, Aaron West and the Roaring Twenties, Shortly, Anarbor, Sundressed and Chase Huglin.

Fast forward to 2018 and the band has signed with Rude Records to re-release their highly-successful EP, Pastel, which released on May 11th, with a new rendition of single, “Crawl” which features guest vocals by Bonnie Fraser of Stand Atlantic. The song is about talking yourself away from a toxic relationship and details the healing, learning, and moving on moments post separation. Continuing the moment, Crooked Teeth have announce their forthcoming EP, Honey featuring lead single, “Honey” due out November 16th.

Paul Collins to Drop New Studio Album “Out of My Head”