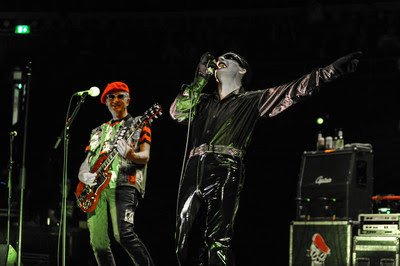 LA Show w/ Alice Bag and the Sissy Bears
“…a rage of rude bamalama and embedded pop-song smarts that, with time and sense, now sounds as consistent and fundamental as the Clash and Sex Pistols hymnals.”
Rolling Stone
“The Damned are a band of infinite depth and a wide variety of pleasures. Their catalog includes high-quality blurs of melodic punk, Beach Boys-ish flowery psych-pop, chiming, bittersweet post-punk, Moody Blues-ish bombastmopherics, spiraling goth and soaring faux soul, all brilliantly executed…With their predilection for both massive power and chaos and highly developed and subtle songwriting, they continue to be an effective and dramatic touring act, to this day.”
New York Observer
“…across two sets, the band — which still features vampiric vocalist Dave Vanian and guitarist Captain Sensible — worked their way backwards, more or less, through their entire catalogue, delivering most of their best-loved songs along the way. Vanian’s voice is still in top form, and Captain Sensible provided the riffs and comic relief.Fantastic show.”
Brooklyn Vegan
“The show was anything but a by the numbers nostalgia fest. Saturday night in New York The Damned delivered a performance that would leave many bands half their age in jealous awe.”
Concert Addicts
“The Damned are 40 this year and still punk as fuck. Or goth as fuck. Or something in between that was never quiet the Ramones or Bauhaus, but Dave Vanian dressed like a vampire and Captain Sensible wore gonzo plaid. Something for every counterculture.”
Diabolique Magazine
“For a band in their 40th year, The Damned surprisingly still have more energy than many groups half their age. Founding members singer Dave Vanian and guitarist Captain Sensible are all over the stage, moving almost constantly as they work their way through one song after another.”
Chunky Glasses
Follow The Damned:
Website
Facebook