DOWN BY LAW DEBUT VIDEO FOR “REBRAND IT”

**11TH FULL LENGTH ALBUM, ALL IN, OUT NOW FROM CLEOPATRA RECORDS**

Veteran punk band Down By Law recently released their 11th record, All In, via Kung Fu Records under exclusive distribution through Cleopatra Records, Inc. Today, the band has followed up with the debut of a brand new video for their latest single “Rebrand It.”

Watch The Video For “Rebrand It”

“We are so stoked on this video. Dave had the idea of doing something different, and asked if an animated one was possible. I remembered that Obituary just had a really amazing pair of animated videos come out. So I asked my buddy, bassist Terry Butler, for details. And he hooked me up with the animator, Balazs Grof. He did an amazing job. It really fits the upbeat vibe of the song. I can’t decide which is my favorite part. But I love that my favorite Reverend guitar was replicated spot on.” – Sam Williams

“One of the things that I’ve always loved about DBL is that we absolutely respect our musical roots, yet still sound like ourselves. “Rebrand It” is all about that – never forget the past, but also forge the future. Even has a loving tribute to the Bad Brains. One of my favorite thematic songs Sam and I have ever written.” – Dave Smalley

For nearly 30 years, Down By Law has been a staple in the LA punk rock scene, influencing generations of bands and transcending musical trends along the way with their bold and adventurous musical style. After releasing 10 albums, the band has found a new home with Kung Fu Records and Cleopatra Records, where they’ve released their first record in 5 years, All In. The new album also marks the return of the classic 90’s lineup, featuring Dave Smalley (ALL, Dag Nasty), Sam Williams and John DiMambro, convening for the first time in almost 20 years and joined by drummer Jack Criswell. 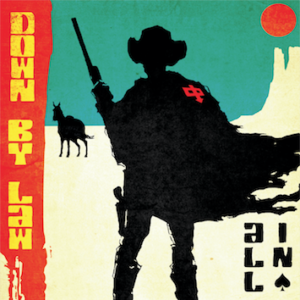