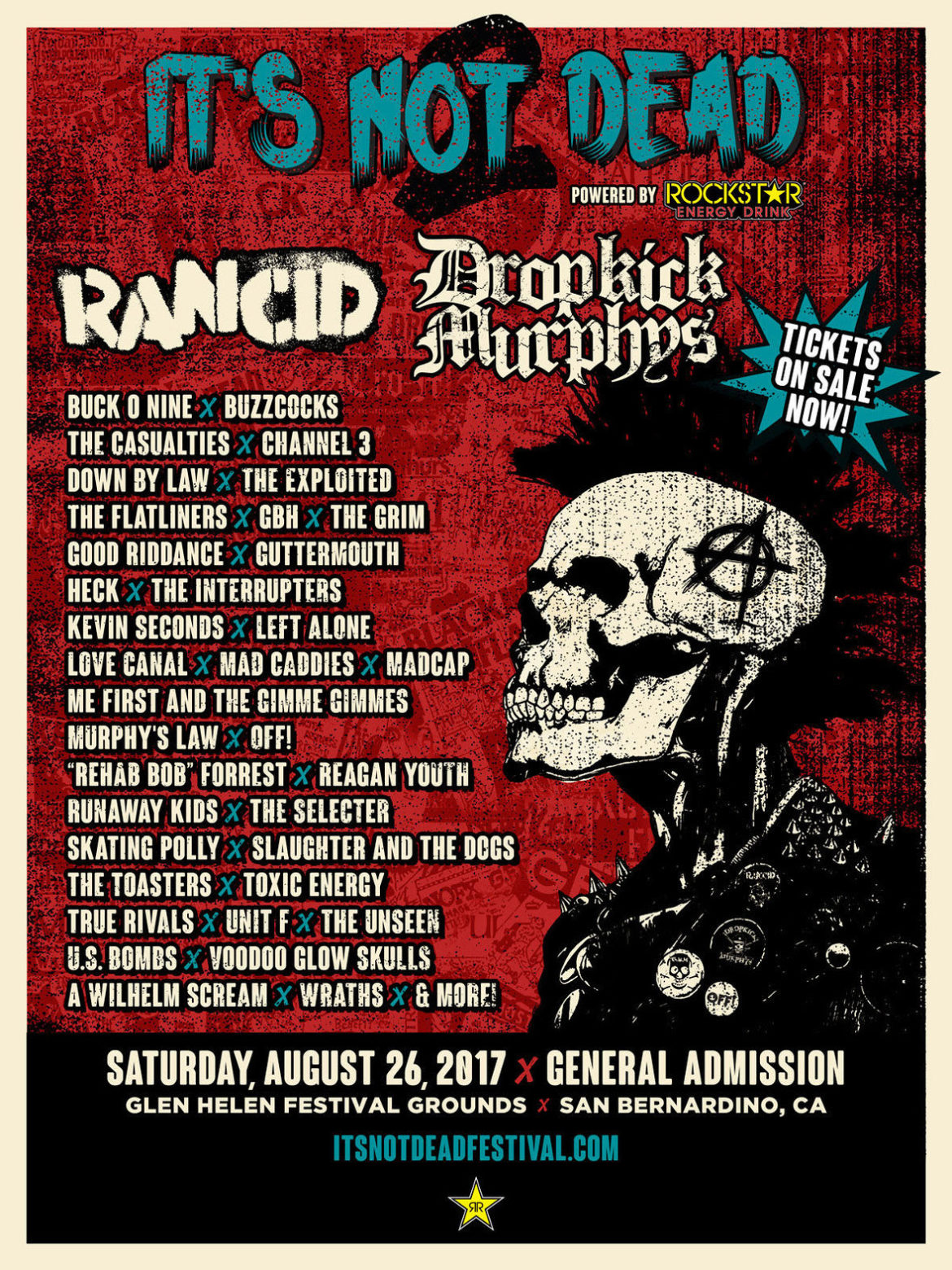 Me First and The Gimme Gimmes Added to IT’S NOT DEAD 2 Lineup!!!!

Co-Headlined by Rancid and Dropkick Murphys

“The grounds transformed into a punk rock nirvana as the It’s Not Dead festival made its triumphant debut.”- Press-Enterprise

“I never thought I’d see most of the bands on the lineup. Nearly every band is the equivalent of The Rolling Stones for the punk genre and seeing them all at once was nothing short of incredible.”- LA Music Blog

“…brings together over 3 decades of punk rockers, giving many of us a chance to experience the soundtrack of our youth.”- The Pier

Me First and The Gimme Gimmes have been added to the already stacked lineup for It’s Not Dead 2.

One of the country’s largest punk rock festivals, It’s Not Dead is returning to Southern California’s Glen Helen Amphitheater Festival Grounds, on Saturday, August 26, after a two-year break.

Me First and the Gimme Gimmes join previously announced co-headliners Rancid and Dropkick Murphys, plus A Wilhelm Scream, Buzzcocks, Channel 3, The Casualties, Down By Law, The Exploited, The Flatliners, GBH, Good Riddance, Guttermouth, The Interrupters, Kevin Seconds, Mad Caddies, Off!, Runaway Kids, The Selecter, The Toasters, Wraths, U.S. Bombs, Voodoo Glow Skulls and many more. See lineup below.

Kevin Lyman says, “Excited to announce the addition of Me First and the Gimme Gimmes to the festival lineup. Can’t wait to spend another day in the sun with old friends getting back to our roots.”

All tickets are general admission are on sale now on the festival website.

Tickets are also now available for purchase with no service fees at Dr. Strange Records in Rancho Cucamonga, CA (7136 Amethyst Ave.) and Programme Skate and Sound in Fullerton, CA (2495 E Chapman Ave.) Kids 10 and under will once again be admitted free with a paid adult.

Returning to the festival this year are the pop-up art exhibition ‘Art’s Not Dead’ and the ‘Punks Well Read’ book signing and literary area, both curated by renowned punk rock photographer Lisa Johnson.

The Art’s Not Dead art show will exhibit and sell works from many of the underground scene’s most acclaimed artists and photographers.

Additionally, there will be a ‘Punk Swap’ zone of unique and artisan finds under the big circus tent.

It’s Not Dead has once again partnered with Rally Bus. Fans can now book seats for travel on a high-end bus to the festival, saving themselves from the hassles of driving, parking, and navigating traffic. Travel is better together with Rally! For more information, visit: http://rlyb.us/dead826

What: It’s Not Dead Festival

Me First and the Gimme Gimmes

Slaughter and the Dogs