Greg Antista and the Lonely Streets, a fast-rising Southern California rock group which gives voice to working class concerns in 3-minute jolts of perfect pop, have announced details of their forthcoming debut album Shake, Stomp and Stumble. The title will be issued on LP/CD/DL via Primal Beat Records on May 17. Pre-order HERE. 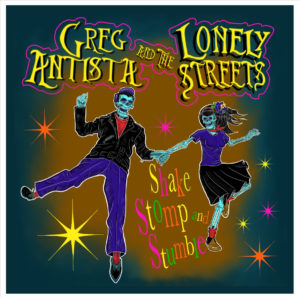 Shake, Stomp and Stumble recalls the sincerity of Johnny Cash and the country-infused, socially conscious anthems of Social Distortion. Its nine party-starting songs are anchored by indelible melodies, heartfelt vocals, powerful musicianship, and a steadfast sense of community. The album was produced and engineered by Paul Miner.

The joyous, colorful album cover art for Shake, Stomp and Stumble — which depicts a pair of rockabilly skeletons in full swing dancing abandon — was designed by Louis Perez III, the son of the famed Los Lobos songwriter/instrumentalist who shares the same name. The image and logo design evoke the rich Hispanic culture of Southern California, a heritage shared by three members of the Lonely Streets. “Even though the Lonely Streets don’t sing any songs in Spanish, it feels perfectly natural playing with bands that do,” says Antista. “The album art is a great visual expression of our music.”

The goal with Shake, Stomp and Stumble was to make its sound, style and stories quintessentially reflect the group’s home base of Fullerton in Orange County. The album provides a snapshot of those lucky enough to have survived the punk rock explosion of the 1980s. Drugs, alcohol, and tales of heart-breaking Latinas — with just a touch of nihilism sprinkled on top — aren’t the sum total of the experience, but they certainly mark the milestones and are relatable topics from which to draw inspiration.

In 1979, Antista was classmates with members of then-fledgling punk acts  Adolescents, Agent Orange and Social Distortion at Troy High School. He especially became fast friends with Steve Soto (Adolescents, Agent Orange) with whom he would later form the band Joyride. The two remained close up until Soto’s death last year at the age of 54. In tribute, the Lonely Streets’ sole cover on the new LP is a sweet, melancholic take on Soto’s 2016 tune, “Forever.”

Elsewhere, the album focuses attention on a pair of relationships that have gone off the rails (“Goodnight Ramona,” “Carmelita”) and offers up a tribute to a fallen heroine from the hit AMC series Hell on Wheels (“They Killed Lily Bell”). Live favorite “U-Haul” finds a jilted lover showing up with the cops at her ex’s doorstep, while “Nasty Weather” suggests the best way to combat life’s ups and downs is by holding close the ones you love. Taking an approach similar to the Ramones or Buzzcocks, these mini-epics of angst and despair arrive with a sugarcoating — the sentiments are delivered in the form of concise pure pop nuggets, wrapped in singalong choruses and spry rhythms. The semi-comedic “U-Haul” wouldn’t feel out of place next to “The KKK Took My Baby Away” on the Ramones’ Pleasant Dreams and Jessica Kaczmarek’s breathlessly careening guitar solo on “Carmelita” recalls the power pop heights of Blondie’s Parallel Lines. Kaczmarek is endorsed by Gretsch Guitars.

The lyrics to the ferocious rocker “Shiver” provide the album with its title and “Finally Say Goodbye” is described by Antista as “a three-minute hip-shakin’ celebration of one door closing and another opening in this life.”

The album’s most poignant entry is “Beat Down and Broken,” a track Antista admits he wrote upon hitting a personal low point in his life, but which can easily be interpreted as a statement on his native SoCal’s long-standing homeless crisis: “Used up all my lifelines, there’s no one left to call / The ones who care, don’t care to see just how far you fall / The Thunderbird she’s come to rest in this Chevron parking lot, there goes the last friend that I’ve got.”

As for the band name, Antista says “’Lonely’ is just one of those words that has always evoked emotion in me. I love Roy Orbison and when Springsteen wrote the line ‘Roy Orbison singing for the lonely’ (‘Thunder Road’) it made me feel like I had found a place where I belonged.”