It’s easy to let the negative outweigh the positive. So how do you shake those feelings of underachieving when they start creeping back? Your best defense is to pull back and reflect on everything that you have accomplished and that’s exactly what Neckscars does on “Not Enough JPM’s.” Set to an explosive punk rock soundscape, “Not Enough JPM’s” drives the message directly into your skull. The newest single from their upcoming debut album, Don’t Panic, is currently streaming at PunkRockTheory.com. “Not Enough JPM’s” will be available on all streaming platforms Friday, May 28th. Teaming up with Sell the Heart Records (US) and Engineer Records (UK), Neckscars will release Don’t Panic on June 18th. Physical preorders for Don’t Panic are now available from both Sell the Heart Records (US) and Engineer Records (UK).

Bio:
Formed in Downstate, New York in late 2018, Neckscars are Will Romeo (Vox/Guitar), Justin Parish (Guitar/Vox), Colin Harte (Bass), and Craig Sala (Drums). Over the past two decades the members have been cutting their teeth in the DIY scene and have gathered to form this expansive collaboration. Without any specific stylistic direction in mind, they were determined to write a diverse collection of songs which proved to be an enjoyable process. The result was a classic punk rock and roll sound that doesn’t lean too hard on nostalgia and standard formulas. You can hear them echo influences ranging from Seaweed to Dead Boys as they embrace their unbridled enthusiasm.

In March of 2020, Neckscars entered Nada Studios in Montgomery, New York with Producer John Naclerio and Sean-Paul Pillsworth for their first full-length recording. Ripping through 8 songs in just three days, the session came to halt in response to the Covid-19 Global Pandemic. The band returned in the fall to tie up loose ends and bring another two songs to the table. Completed with a mastering by Jesse Cannon, Neckscars will be releasing their debut album Don’t Panic in the summer of 2021. 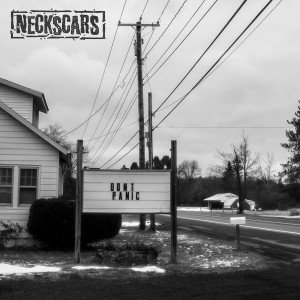