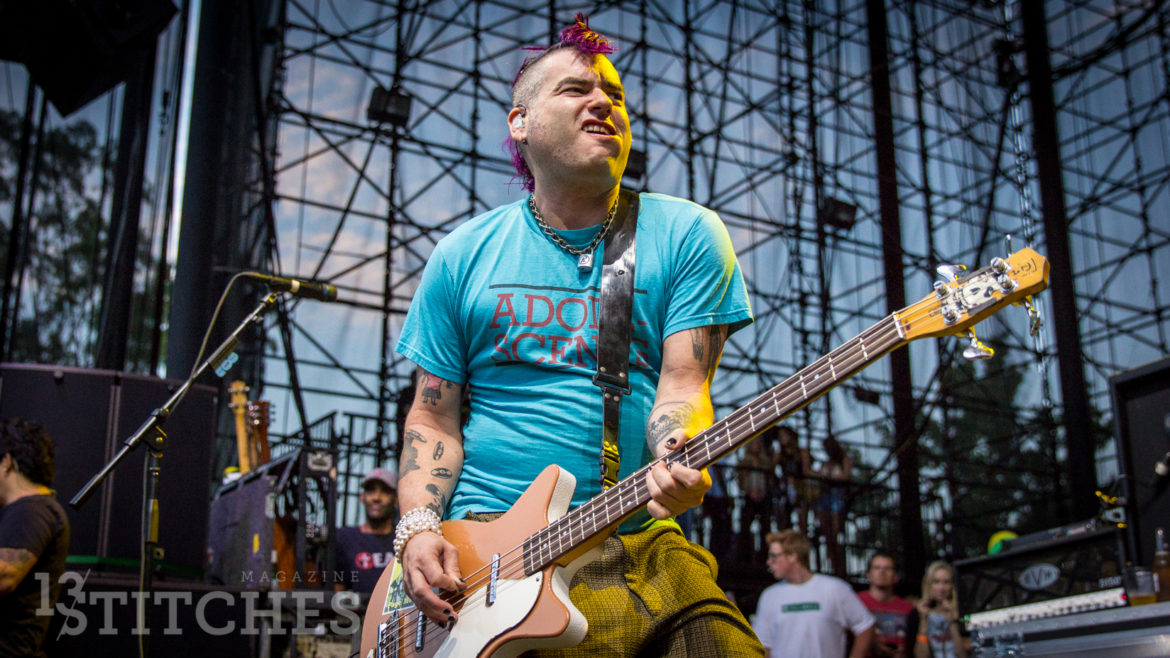 This wasn’t your typical Punk Rock show, in fact, NOFX was the only Punk Rock band that performed. They were squeezed in the middle of Fishbone, Stephen Marley, and Slightly Stoopid. So if you came to see NOFX, then you are truly a dedicated fan. Fat Mike frequently made references to the odd mix of attendees, pointing out that the actual NOFX fans, dedicated punks with humble means, were up on the lawn forming a huge mosh pit, turning the “cheap seats” into a classic NOFX style party. In classic Fat Mike humor, reference was made to the fans in the front rows, with accusations like, “you must have sucked somebody off, because there’s no way you can afford those tickets”.

I love NOFX, and I love the commentary, so a concert like this gives Mike, El Hefe, and Melvin plenty to poke fun at (Smelly doesn’t seem to talk too much, he’s busy on the drums). An older gentleman in the front pit area sporting a tie-dyed shirt caught Mike’s attention and suffered many references about how there was no way he was there to see NOFX – Mike reminded everybody (more than once) about this fact. The reality was, many were there to see NOFX and I am sure some new fans were created as well. I think by the end of the set that Mr. tie-dye developed an appreciation for the punk debauchery we love. He may have even received one of the two bags of chips that Mike was gifting the fans in the pit – maybe he got the Nacho Cheese Doritos or the Lays Sour Cream and Onion. I would kill for a souvenir like that!

NOFX is very self-deprecating when it comes to their live shows as evidenced with the live album (recorded over two nights at the Roxy in West Hollywood, 1995) titled I heard they suck live (Fat Wreck Chords, 1995), but I will counter that title with my opinion that they never suck live; NOFX is among the most fun and and entertaining live acts around! The sound for the opening bands – Fishbone, Stephen Marley, and NOFX was really good at Verizon. However, when Slightly Stoopid performed, I thought the sound was blown out and distorted; a problem that is magnified with the unique beat that is reggae.

The playlist for NOFX had a good mix of songs, with “60%”, “72 Hookers”, “Goddess”, “Franco Unamerican”, and “Linoleum”. Guest vocals on “Eat The Meek” with Fishbone’s singer, Angelo Moore (in his Marching Band uniform), made for a well-rounded night of all time NOFX favorites!

I have nothing bad to say about this NOFX performance, other than I wish they played longer and I wish they had been the headliner! That’s just my humble (slightly biased) opinion… OI! OI! OI!

The Stitches – The Observatory – Santa Ana