The Dollyrots to Hit The Road on the “Rah! Rah! Radical Tour” 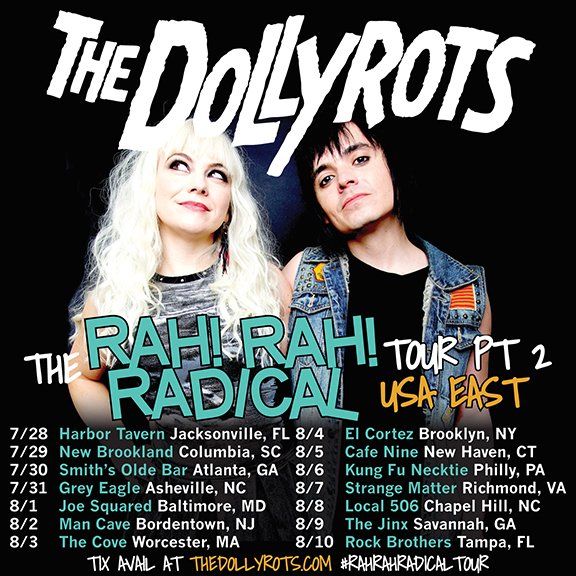 The Dollyrots to Hit The Road on the “Rah! Rah! Radical Tour” Part 2: USA East

The Dollyrots are gearing up to hit the road on the “Rah! Rah! Radical Tour” part 2:USA East Coast kicking off on July 28. Dates below and tickets go on sale this Friday, June 22 at: http://www.dollyrots.com/web/tour/.

“There are enough joyless punk screamers and pretentious Green Day-lite bands out there but far too few, like the Dollyrots, who can channel the frothy, punchy brilliance of ’90s-era Josie & the Pussycats” – All Music Guide

The band’s 2017 album Whiplash Splash is available on CD, aqua-blue vinyl, and digitally on the band’s very own Arrested Youth Label with distribution via MVD Entertainment Group. Whiplash Splash debuted on both Billboard’s Heatseekers chart at #13 and Billboard’s Independent Albums chart at $#31. The band’s 2016 live album/DVD Family Vacation: Live in Los Angeles debuted at #15 on Billboard’s Heatseekers album chart and Barefoot and Pregnant garnered their first chart appearance, peaking at #7 on Billboard’s Heatseekers. Both chart appearances were preceded by highly successful crowdsourcing campaigns through PledgeMusic. This followed the group’s 2012’s self-titled LP, two albums on Joan Jett’s Blackheart Records, and a 2004 debut through the venerable Lookout!/Panic Button Records.

The Dollyrots have recently launched at Patreon. Support them for exclusive content, music and more and become part of their Patreon community here: https://www.patreon.com/thedollyrots

See the Dollyrots in the following cities:

Green Day - Wake Me Up When September Ends