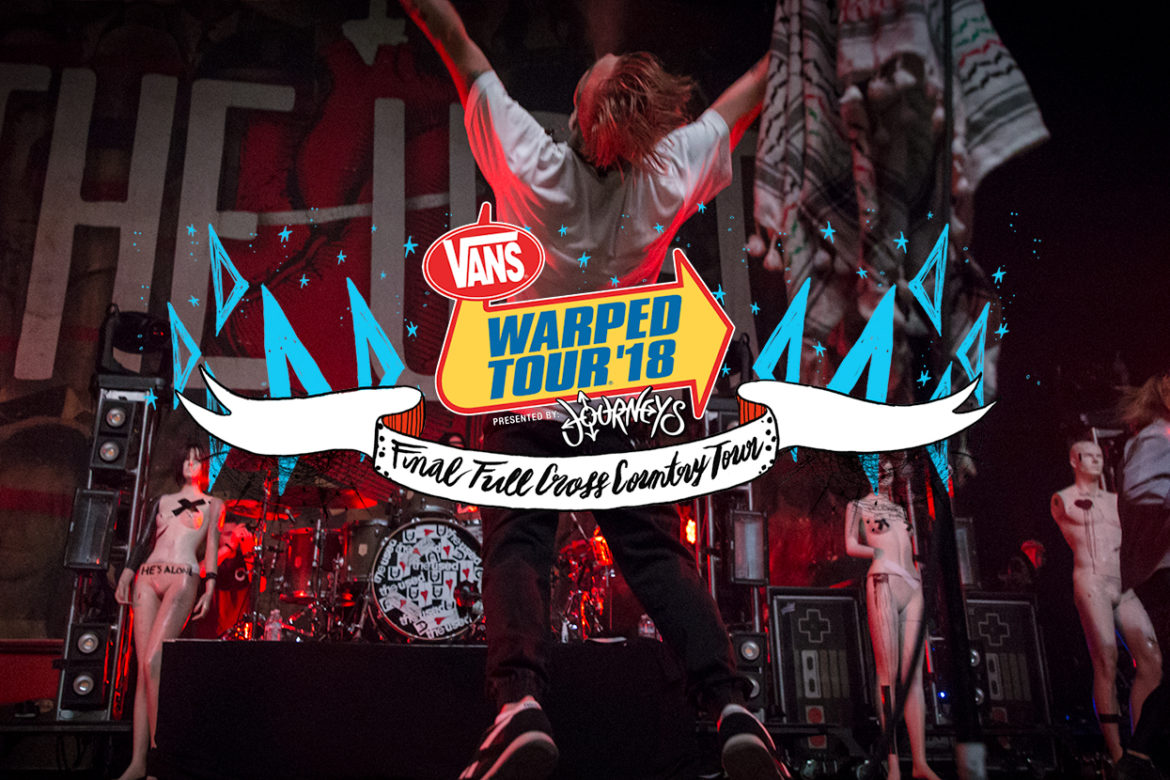 2018 will be The Vans Warped Tour’s final cross-country run.

Brings Together Friends From Throughout The Years
Including Reel Big Fish, Bowling For Soup, The Used, Frank Turner,
All Time Low, Simple Plan, Taking Back Sunday, The Maine, Waterparks, The Interrupters, ISSUES, SUM 41, Tonight Alive, Knuckle Puck, 3OH!3, and more… 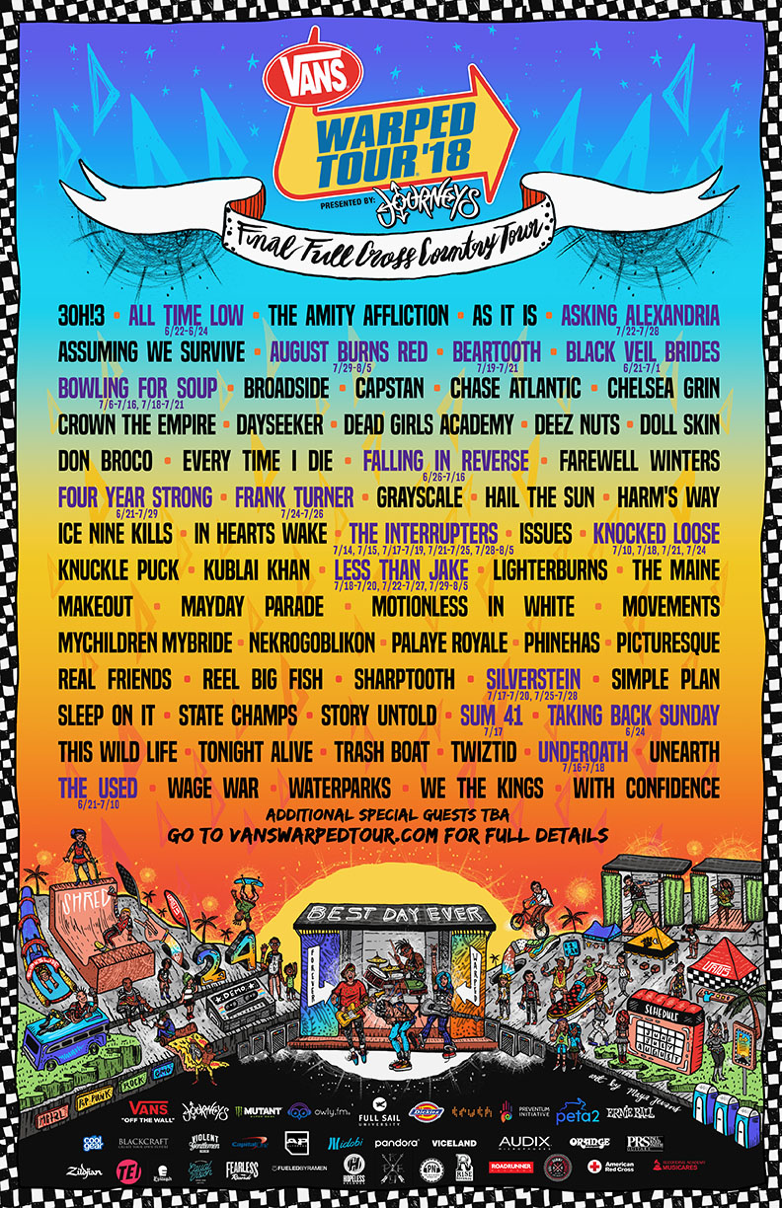 Additional Special Guests To Be Announced

The entire lineup for 2018’s Vans Warped Tour, presented by Journeys, was revealed via a special announcement video, which can be viewed now at VansWarpedTour.com.

It was previously shared that this would be the final cross-country run for the tour, now in its 24th year. On the upcoming shows, founder Kevin Lyman has shared: “I truly am happy to get the chance to travel around the country one more time to thank you for your support, and bring you another best day ever.”

For its final run, the tour is thrilled to welcome back countless bands who have rocked Vans Warped Tour over the last 24 years including Reel Big Fish, Simple Plan, All Time Low, Four Year Strong, 3OH!3, Less Than Jake, Underoath, We The Kings, The Used, Tonight Alive and more. Adding to this year’s lineup are up-and-coming acts such as State Champs, Trash Boat, Don Broco, Grayscale, Waterparks, Real Friends, and Movements.

The Vans Warped Tour is the largest traveling music festival in the United States, and the longest-running touring music festival in North America. Originally conceived by founder Kevin Lyman in 1995 as an eclectic alternative rock festival, with a focus on punk rock, over the years the tour has grown to include a multitude of genres, including metal, hip hop, reggae, pop and more. It remains one of the best tours to attend to discover emerging acts, to learn more about wonderful non-profits and companies who are working to make a positive impact on the world that surround them, and to meet like-minded friends.

Over the past two decades, Vans Warped Tour has built a legacy as the must attend summer festival for rock and music lovers alike. Since its start in 1995 it has provided a platform for established as well as up-and-coming artists, with past performers including blink182, No Doubt, Sublime, Beck, Katy Perry, NOFX, Limp Bizkit, Black Eyed Peas, Green Day, Eminem, Yellowcard, Bad Religion, and countless others.

In addition, the tour continues to host a wide array of amazing non-profits and educational workshops for attendees and 2018 will be launching the FEND Movement (Full Energy, No Drugs) in partnership with the Preventum Initiative. The FEND Movement empowers youth to make a stand against opioids. The FEND Movement aims to engage 50,000 young people between March and August 2018, giving them the chance to earn rewards and prizes as they increase their knowledge and change their attitudes and behaviors in relation to opioids. Youth can participate by downloading the Preventum app and on-boarding to the FEND campaign.

A Voice For The Innocent, American Red Cross, Hope For The Day, Feed Our Children Now!, Living The Dream Foundation, To Write Love on Her Arms, and truth will all be involved this summer, just to name a few. Fans can see their favorite bands as well as become educated on these causes and how they can help.

“I am very excited about the upcoming year. With it being the last tour, the non-profit presence will be as big as ever. Groups who have been out in the past will be coming out in more markets, and hopefully we will attract new non-profits,” comments Sierra Lyman. “With more non-profits coming out there will be more options for our audience to hopefully get involved before, during, and after the tour. I am hoping that this last year encourages non-profits to partner with bands and for bands to partner with non-profits on their own events and tours once this summer is over.”

The Entertainment Institute will return to the 2018 tour as well, hosting educational workshops and Q+A’s hosted by the industry’s most successful writers, artists, and photographers. More information regarding the artists conducting workshops will be available in April at http://www.thinktei.com

“Kevin and the tour have touched so many lives through their commitment to giving back to the community,” shares dailyKARMA CEO Patricia Dao. “They’ve been doing it long before it was the cool thing to do.  Our team is thrilled that dailyKARMA will be powering Warped Tour’s online fundraising efforts this year.”

Early Bird Tickets, as well as Super Fan Bundles, for this year’s tour on are sale now and can be purchased at www.vanswarpedtour.com. As a bonus for early ticket buyers, the first 500 tickets sold for each show will be at the lowest price available and will include a digital download of the Official Vans Warped Tour 50-song compilation. The cover was revealed earlier today, and features Tonight Alive’s Jenna McDougall.

The 38-date tour will commence June 21st in Pomona, CA and end on August 5th in West Palm, FL.

Dad Brains: Punk Rock For Dads and the People Who Love Them