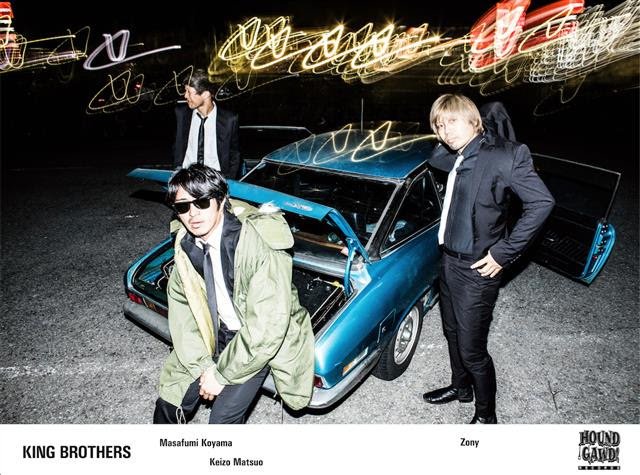 Hound Gawd Records is excited to announce the release of, Wasteland, by Japanese band King Brothers on September 28, 2018. The record is the band’s 20th Anniversary release and their first in eight years. This wild and unfettered three-piece conjures the Germs backing Howlin’ Wolf.  I-94 Bar Magazine calls what they do “turning the blues inside-out.”

The band, who formed in 1997 and hail from Nishinomiya City, are one of Japan’s longest standing rock outfits and have performed with international rock icons like Jon Spencer, the White Stripes and the Strokes. Jon Spencer produced their early albums which were recorded by Matt Verta-Ray (The Dirtbombs, The Sadies, Heavy Trash) in New York City. Since their first release in 1998 they have recorded for the Japanese major label Toshiba EMI and also for U.S. cult label In The Red.

As electrifying as their recordings are, the band is infamous for their incendiary live shows. The trio takes to the stage dressed in black and white suits (a look that has become their trade mark). King Brothers’ performances heat up fast and become so explosive that they’ve been banned from nearly every rock club in Osaka for wrecking the place.

The band is Keizo Matsuo on guitar, harp and vocals, Masafumi “Marya” Koyama on guitar and Zony on drums. Their signature two guitar and drums assault crams toxic punk rock, barbed-wire blues into each song while wrestling monstrous fuzzed-out noise. The groove has never been stronger than on their new release, Wasteland.

Wasteland was produced by the band at Nishinomiya City Studio and mastered by Soichiro Nakamura at Peace Music Studio. Nakamura has produced albums for artists like Moe Tucker, The Residents, The 5.6.7.8’s, and Guitar Wolf. Album artwork was rendered by longtime friend Arisa Momonoi and photos were shot by Kazuki Watanabe and Tomoko Okabe. Wasteland is the band’s tenth release and their first with Hound Gawd Records. Available formats for the release include digital download, CD, and vinyl LP which includes download card and bonus tracks, plus limited edition of 100 copies on orange vinyl.

The eleven tracks on Wasteland are:

Stash Dauber declares that on Wasteland the King Brothers are “a lot closer to Boris’ punky side than they are to Spencer’s garage-blues or anyone’s idea of “classic rock.” Oculus calls their sound “coccyx-crunching, psycho-blues,” while Eric Oblivian of The Oblivians gushes “[they are] definitely the best band in the world.” And Seiji of Guitar Wolf adds “Wasteland bangs like you blow up a bank vault!” The band is touring in Germany and the UK this October.

Sunset Radio Releases a New Video for “My Everything”