Tattoos, Low Riders, Music, and Politics… It Must Be Musink! 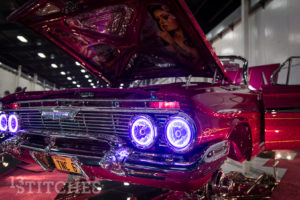 Musink kicked off its 10th annual music festival and tattoo convention on Friday night at the OC Fairgrounds in Costa Mesa. This year’s festivities included hundreds of world-renowned tattoo artists, a killer Low and Slow Car Show, and a concert lineup that single handedly restored Musink’s reputation as a legitimate punk and alternative music festival. Add to it the political climate today and you have the makings of a great event. This year’s Musink likely had the best concert T’s ever, politically charged and creative, NOFX and Bad Religion’s new artwork is worthy of a look. 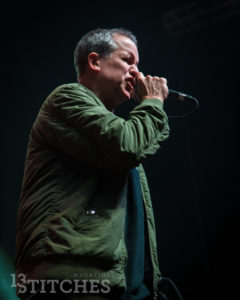 Friday night kicked off the three-day music series with A Wilhelm Scream, Lagwagon, The Vandals, and NOFX. 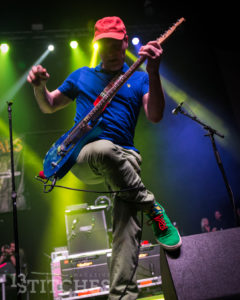 The Vandals brought a heightened energy to the stage on Friday night. Since the mid-1980’s I have seen the Vandals dozens of times live and, in recent years, in spite of their indisputable energy and big personality on stage, they’ve had some less than great shows. It can be a bit of a crapshoot when the Vandals play; from sound issues to clumsy showmanship, as one of my favorite bands of all time, on stage the Vandals run the risk of feeling, I’ll say it, old. At Musink on Friday night they were anything but old. The Vandals delivered a high-energy performance and stellar sound. It seriously brought me back to those early days at the Cuckoo’s Nest, every member of the band playing true punk music with the presence, attitude, and sound that has made the Vandals one of punk’s greatest bands since the 1980’s.  On vocals, Dave Quackenbush played off guitarist Warren Fitzgerald’s exuberant energy, priming the pump for a fun pit for NOFX. 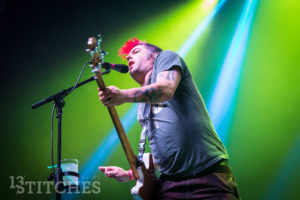 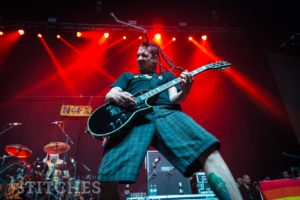 The birth scream of punk rock, NOFX killed it as Friday night’s headlining band. Fat Mike dominated the stage in a performance that secured Musink’s reputation as a premier punk and alternative rock festival. NOFX kept a viable pit rolling hard for the entire set and the band’s energy seemed renewed. The addition of a backup vocalist rounded out the sound and added a sense of (they’re not going to like this), professionalism (sorry guys, but you sounded professional). Surprise guest, Less Than Jake’s Roger Lima, stood in for new daddy to twins, Eric Melvin, dreadlocks and all and he did not miss a beat, screaming out Melvin’s riffs as if he’d been with the band for years.

Not to get sidetracked, BUT…

On the note of kids, let’s face it, punk is old and most of us have kids now. There were kids at all of the shows this weekend and while not a single punk enthusiast would have it any other way, punk shows are hard on kids and not really the traditional setting for “mom of the year” candidates, as pointed out by Fat Mike during the show on Friday night. Music lovers bring their kids to punk shows because we don’t want the genre to die out, and let’s face it – it is at risk of dying out. That said, to all of you millennial assholes, the reason there is a punk show for you to go to is because the “old people” scratched and fought to open a path for you shits to have all of the alternative music you want. Believe me, there is nothing in your comfy little worlds that can compare to being the only kid in your town with spikey pink hair wearing a Motorhead t-shirt in 1983. Cut us some slack when we, yet again, take the hit from our parents and peers for making decisions about our lives that society deems “inappropriate”, including taking our kids to the punk rock show. We do this because your generation has failed miserably to produce enough music worth listening to, to ensure the survival of a dying breed. When I ask you to allow an OG punk’s 10 years old, four and half foot spawn to stand on the only riser in the place so he’s not getting trampled and so he can see his favorite band ever, NOFX, play, get your skinny, pre-ripped jeans ass off the riser and hand it over. Some day you might thank me when that kid grows up and starts a band worth seeing, so you can take your 10 year old to see what mommy did in her 20’s.

Adolescents, Union 13, The Vulturas, Melted at the...

Naked Aggression, The Last Gang, and Melted at...

Old Firm Casuals, Charger, and The Vulturas at...

Did not know your nom de plume was SaraTonin….. love it!