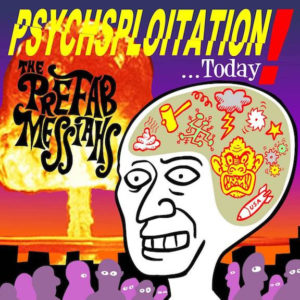 HERE’S WHAT MEDIA HAS BEEN SAYING ABOUT PSYCHSPLOITATION TODAY:

“Psychsploitation Today offers more garage goodies with tongues firmly planted in cheeks, fuzz boxes (and phasers) set on stun, and hooks aplenty hailing from all directions. Everything is played with gusto and gumption, ‘60s influences are proudly pinned to sleeves, but the Prefabs also inject their own ‘80s take on garage/psych that’ll have us digging our paisley shirts and Beatles boots out storage.” – Jeff Penczak, SHINDIG! MAGAZINE

Pazz & Jop: Protests and Escapes ~ In the face of the unprecedented attacks on the pillars of democracy, there were some great protest songs in 2017 worth noting including The Prefab Messiahs’ “The Man Who Killed Reality.” – Ted Leibowitz, THE VILLAGE VOICE

“The Messiahs deliver straight-up fuzzed-out garage rocking, and do so rather well. There’s been some comparisons to the Bay Area’s Castle Face crew, e.g. The Oh Sees, Ty Segall, and White Fence, but their weird edge and refreshingly serious lyrical focus hits my garage spot a little differently, and that’s cool.” – Joseph Neff , THE VINYL DISTRICT

“While other bands simply try to revive the past, the Prefabs redefine it creating an album that sounds anything but dated.” – Tim Shannon, BOSTON HASSLE

“Are The Prefab Messiahs condemning psychsploitation or pursuing it? Both, maybe, Whatever the hell they’re up to, it’s commendable hoot.” –  JR Moores,RECORD COLLECTOR MAGAZINE

“The New England band’s acid-tinged rock/pop is as tough and tuneful as anything else from the early ‘80s garage revivalist explosion they originally knocked around in.” – Michael Toland, BLURT MAGAZINE

“The Prefab Messiahs are a post-punk band with actually credibility, considering they formed in 1981 amid the peak of DIY basement guerrilla-style attacks on the status-quo of pop. Fast forward three decades later, with a little help from local heroes Burger Records, and this Boston-based four-piece is releasing an album of brand new material, saturated with years of experience as an “art-damaged psych-pop collective” eager to prove their worth. And they’re proving it pretty hard on their forthcoming album, Psychsploitation Today. Keep your ears on this band.” – Maya Eslami, WHAT YOUTH

“You might be thinking they’re a new band, cranking out garage rock jams like some of your favorite artists: Ty Segall, King Tuff, Thee Oh Sees, but The Prefab Messiahs have been rocking out since the ’80s”. – EARBUDDY

“The Prefab Messiahs crawled from the basements and alleyways of Wormtown (Worcester, Mass. to the uninitiated) in 1981, died in 1983 and has been resurrected all these decades on to deliver a new and impressive gospel to a generation with its eyes open and tongues extended, excited about receiving a holy communion in which traces of the lysergic and psychedelic abound. These dudes have not traveled all this distance merely to know the place for the first time. They’ve come to own it.” – Jedd Beaudoin, POPMATTERS

“Fans of Thee Oh Sees, early Mercury Rev, Wayne Coyne’s sparkly glitter cannons, The Brian Jonestown Massacre, Pink Mountaintops and In The Red Records should certainly hop along for a ride on the Prefabs’ scooter. If the groovy organ tones, ’60s garage riffs and catchy choruses are all a bit too blissfully fun for you, the lyrics often swing more to the pessimistic side.” – JR Moores, THE QUIETUS

“… continues to be one of the best left field surprises of the past few years. Using the psychedelic sounds of the mid-to-late ‘60s as their modus operandi, the Prefabs have put together a solid set of day-glo tunes with their latest long player. Even though their sound most definitely hearkens back to that golden age of jangly Rickenbackers and Beatle boots, the group is not content to simply be a revival act regurgitating the sounds of yesteryear. There’s a punk energy and urgency to these proceedings.” – STYROFOAM DRONE

“Fake news? Alternative facts? Worcester rockers the Prefab Messiahs hold nothing back with their scathing indictment of President Donald Trump with ‘The Man Who Killed Reality,’ a bright bit of psychedelic rock bolstered by a satirical cartoon of the president on a rampage of mass destruction. Not subtle, no, but it’s a great bit of protest rock that captures the defiance of an earlier era and recasts it for a modern audience.” – Victor D. Infante, THE TELEGRAM

“Much like the rest of The Prefab’s work, this record is beautifully timeless. It simultaneously feels like it belongs in the ‘60s, ‘80s and in the current age. With songs as strong as ‘Outtayerhands,’ ‘Sometimes Sunnydaze’ and the title track, I feel confident that this album will continue to sound fresh 20 years into the future.” – Keith Hadad, RECORD CRATES UNITED

[ALBUM OF THE WEEK] “… a shredder of an album that’ll shock the senses and melt brains.” – Rob Duguay, MOTIF MAGAZINE

“The Messiahs are as weird as ever on Psychsploitation Today, locking into a psych sound of the mid/late ‘60s when it was hip to be as weird as possible; the whole record is a swirling conglomerate of surf and garage music, chanky tamborine, chorus-drenched harmonies, and a not so subtle nod to the current administration in power.” – Charley Ruddell, THE DELI

“The Prefab Messiahs’ new slab of psyched-out, fuzz-pop goodness Psychsploitaion Today is politically charged and crammed full of all the reverb, fuzz and jangle you can handle.” – 3HIVE