Dad Brains: Punk Rock For Dads and the People Who Love Them

Dad Brains:
Punk Rock For Dads and the People Who Love Them

The Oxnard/Ventura, CA-based band of punk rock dads, is comprised of ex-members of such notable punk/”Hardcore” bands as No Motiv (Vagrant Records), The Missing 23rd (Sessions Records), Creep Division (American hardcore/punk band that featured members of Good Riddance) and The F-ing Wrath.

Buy Dad Brains merch and pre-order the EP at: http://dadbrains.bandcamp.com.

I’m so hungover but didn’t have a drink and I feel so tired that I can’t even think. I’m so confused and feel stuck inside, I need to get outside…
baby… jail. Baby… jail is this the drunk tank? Baby Jail.
I think I need a break.
Go… I’m finally outside to breath the fresh air but then I get a text and read it with a stare, the baby’s kinda fussy can you come back in, I need to take a shower, I feel like I’m in… 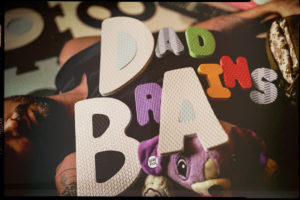 It all started in the fall of 2017. Reformed drummer turned singer Pat Pedraza became a Daddy at the ripe age of 40. Being of Latino descent, he was a bit late in the game…but none the less, his emotions skyrocketed with love, fear, anxiety, and all that stuff New Daddies think of when they realize that it’s not about “you” anymore.

After bringing his sweet little 7-lb,11-ounce girl home, the real work began. Sleepless nights, dark clouds of hormones showering him, baby poop everywhere, breast milk taking over the freezer and even his mother-in-law sleeping on the living room couch; he was then inspired…Inspired to do something great…something only a handful of people do when they have loud inner melodies banging on the side of their head…he decide to sing in a band.

On drives to the store he would shout out lyrics and thoughts that would swirl around in his Dad Brain. He would not only think about the struggles of being a dad, he felt the joy. The joy of seeing her first smile, and the raw love he felt while holding his new baby girl. He then called up his old buddy Matty who he knew from old punk rock bands and who is also a father of 2. Pat knew Matty would understand what he was going through, so they decided to start writing songs…and what a couple hour journey it was. Power Chords and mouthed drum beats were naturally flowing with no effort. Sing-along punk melodies were filling the room…Ohh yes…It was pure magic. They then decided to recruit another new daddy and “Nardcore scene legend” Johnny Boy Crerar, to put his punk rock roots to the test on the skins-and he didn’t disappoint…the fast parts were faster, the dance parts were dancier, and the mosh beats were moshier…wait, are those even words? Anyway, Johnny called up his friend Craig, a former bandmate to play bass….yes he’s a Dad too. He’s also a pretty cool guy who has a big beard.

Ready to rock, the new band decided to get longtime friend and multi-talented producer Roger Camero (No Motiv, Silver Snakes, The Velvet Teen, The Warriors) to record their first self-titled EP. To their amazement, they ended up with 5 punk rock gems that totaled less then 10 minutes…I mean, seriously? What more could you ask for…Amazingly catchy songs about the struggles and love of parenting. Need I say more? Ok, I will.. When Pat noticed his daughter would jump up and down with a huge smile in her jumper as he played the Dad Brains song “I’m Old” he knew the songs were special… It was basically a recording home run folks. So now that the story’s told, Here’s our demands….

Dad Brains songs must reach the ears of Dads across the globe. Dads will feel comforted and relieved knowing that they’re not alone. Hold up though…Dad Brains won’t leave Moms and significant others out…these songs are for YOU and everyone to enjoy. Dad Brains will try to release an EP every Father’s Day for the fact that people might go into some sort of Dad-Like withdrawal if they don’t have new Dad Brains songs to sing. There will also be no curse words in the songs, as Dad Brains wants to set a good example for the little ones. Heck, the band might even put out some Christmas songs. They might even play some shows, that is, if they’re home before bath time. Who knows what this band is capable of? With Dad Brains, the sky’s the limit, and almost anything is possible.

What have people said about Dad Brains so far?

Is This Real? Can I buy a shirt for my husband? F-ing Amazing. Take my money please! Holy Bleep?!?!…

These are all true. Dad Brains don’t lie, it sets a bad example.