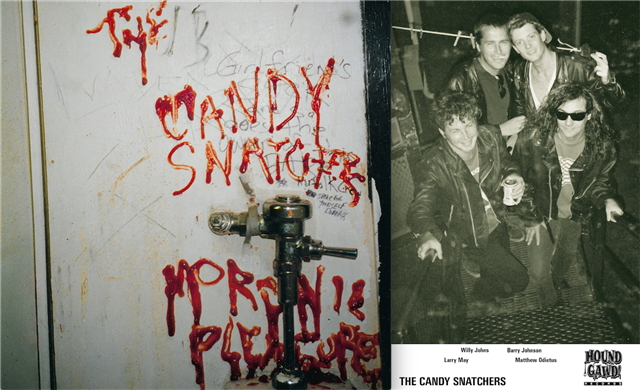 The Candy Snatchers, who formed in 1992 and hail from Virginia Beach, Virginia first mentioned the album, Moronic Pleasures, to their pal Jake Starr in 1997.

“I was amazed at how fast they worked” recording engineer Paul Johnson recalls. “They had me roll the tape while they played the songs from a set list: one song after another until we were about to run out of tape. I might have stopped the tape only a couple of times during the whole session for mistakes’ sake. No one did that in those days… maybe some hardcore punk bands back in the 80’s.” He details “After we did the basic tracks, Matt went back and played a second rhythm guitar and solos pretty much the same way: from song to song without stopping the tape. Vocals, same thing. Larry belted out one song after another. Then we mixed and off they went.”

Jake Starr says with “both attempted [recording] sessions rejected, the band eventually headed back to NYC with Dean Rispler at the engineering helm to re-record most of the songs for the THIRD time. This final session became their second album now titled, Human Zoo. The album was released on Go-Kart Records in 1998 and the previous Moronic Pleasures session at Compactor Studio was forgotten for 20 years….I took on the crusade of rescuing this session from oblivion. First, I spoke with Dan-O Deckelman… who got the master reels from Paul Johnson and managed the digital transfer. Second, I got the multi-tracks to Dennis Kane…who freshly and properly mixed and mastered all 19 songs. There were some missing tracks on Ass Casserole, so my cassette version of the song was used for continuity.”

The line up on this album is Larry May on vocals. Matthew Odietus on guitars, Willy Johns on bass and Sergio Ponce on drums. The 19 tracks on Moronic Pleasures are…

In 2010 the band’s hometown newspaper the Daily Press wrote “In punk-rock circles, their thrillingly chaotic, bacchanalian concerts are legendary. Spit, sweat, blood and flames flew and greasy riffs exploded like hand grenades.” The article also reported that Matthew Odietus “died June 28, 2008, in what was described by friends as a drug overdose. Odietus was 40.” Dean Rispler who worked with the band for years told Alt Daily “Besides the insanity that ensued as soon as they hit the stage—breaking bottles, cutting themselves with the glass, blood everywhere and setting the bass on fire while being played— the band played amazingly well, with great songs in the vein of the Dead Boys, early Misfits, Radio Birdman and The Saints.”

RAY GUN: The Bible of Music and Style by Marvin Scott Jarrett